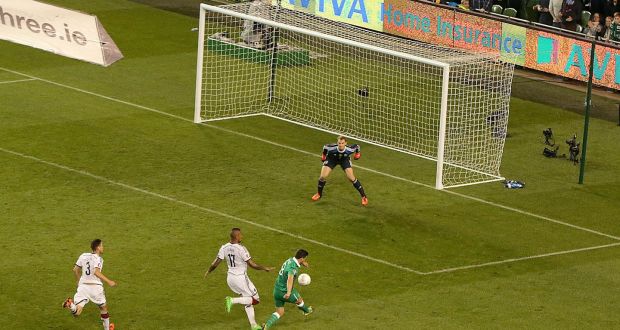 Ireland. The Emerald Island. The green Island. The rainy Island. Home to Riverdance and LOI, the GREATEST League in the world. Or is it? Let us be honest here and start with the reality on how things stand in Irish Football.

It’s been some years now since any team feared any Irish squad, both domestically and on National level.   Irish football is not what it used to be these days. Gone are the great days back in 1990 when Ireland beat Romania on penalties and made the nation believe. Gone are the days when Ireland could actually intimidate any team with their relentless fight and warrior attitude and actually beat Germany.

One of the biggest problems Ireland has as a football nation is the lack of support. Yeah, Ireland always have the greatest fans in the world when they make it to the Europeans every now and again year but where are those fans when Sligo Rovers are coming to Cork? I remember the first time I was on the bench for Cork City back in 2010 and I asked somebody why are we playing on a Friday evening and where are the fans?

I was told that the 500 on the stands was decent enough and nobody would come out on Saturdays and Sundays as people would support rugby and hurling matches. These days, an average of 1500 people are on the stands for LOI and the crowd has been growing on the years but its far from good enough. And you can’t really blame rugby and hurling for stealing the crowds even though it’s pretty spectacular that an amateur sport can bring close to 40,000 people together for the finals.

The problem goes a lot deeper and it has something to do with talent development. As soon as any talented footballer turns 15, he is brought to some little town in the UK, gets 1000€ a week and is never heard from again. And why is that? Because there are no money in Irish Football. Why is that? Because any of the so called greatest fans in the world would rather pay 1000€ for flights, hotel, drinks and a Ryanair ticket to Liverpool than go to Turners Cross and support their hometeam.

Its quite ironic when you think how much the word community is being thrown around in this country. Seriously, next time, you watch the News and they interview some local guy, pay attention to how many times he can mention the word community in 30 secs!

Nonetheless, the money is not there and the greatest league in the world can’t even compete with Blyth Spartans.

But at least there are some that go on to play Premier League football. That level will surely benefit the National Team and make them competitive enough to humiliate a team like Gibraltar. Indeed, over two games Ireland completely trashed them with 3-0 in total. The line up on the 2-0 win against Gibraltar had 8 Premier League Players and 3 Championship players. Let that sink in for a while….

So whats the problem? I honestly don’t know but it looks like there is a serious serious motivation problem here. Had the team consisted of 11 clones of Roy Keane, the Gibraltar team would have been murdered. Absolutely murdered. Irish football is struggling right now and under Stephen Kenny it hasn’t really improved but to be fair, its early days. I sincerely hope he will bring some fight and spirit into the team but he is hardly that type of a coach, not as I see it. It would be great because Ireland is dying for some success.

Whenever they broadcast any qualifier match on TV and they try to showcase the greatness of Irish Football, they keep showing the same two clips: The 1-0 win in 2015 over Germany and the 1990 penalty shootout. Like I said, the nation is dying for some succes, or at least some other montage clips.

Ireland v Germany 1-0. Great Succes For Irish Football And Its Been 5 Years!!!

Irish Football Should Be Great

What makes Irish Football Great? The fans, the talent and the Irish fighting spirit! But isn’t it what is wrong with Irish Foodball?The fan culture is great. No other team in the world have a fan base that can out-sing a hometeam even though they are only 3 lads from Limerick in a packed Wembley. The mentality have to change so that the fans will support the teams in LOI but for that to happen it needs to be much more attractive to watch.

The league simply need to hold on to the talent instead of selling them off to England and why can’t the talents from England come here? Maybe the clubs should try to be more ambitious and dream bigger and try to develop agreements with other clubs so that the talent traffic is not just one-way. After all, why can’t Irish Football not be like Scottish Football?

The fans and talent is present and the Irish fighting spirit resides in every athlete on the pitch. It’s just a matter of motivation. As far as the National squad goes, they need to stop seeing themselves like the underdogs and start believing in themselves.