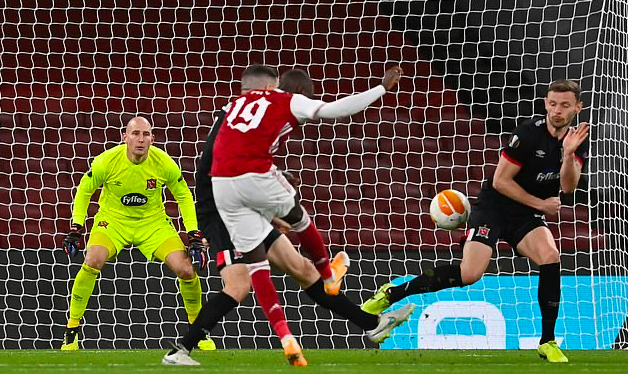 The dust has settled and it’s a new year. But how did Dundalk do in Europa League?

In this article I will be looking at Dundalk’s 20/21 Europa League campaign and how poor it actually was. While they were dealt a reasonably tough group, there still should’ve been belief in the camp that qualification was possible. Besides Arsenal, Dundalk had to compete with teams like Molde and Rapid Wien and technically could have snatched a 2nd place.

But during the campaign the league of Ireland champions amassed a total of 0 points, conceding 19 goals while netting 8 in the process. I will only be breaking down the first 5 games as by the last game came, Dundalk were already knocked out and finished last in the group.

First up was Molde at home (at the Aviva due to the current circumstances) and this was probably the best chance where Dundalk could realistically get some points. After a decent first 25 minutes of play and pressure, Sean Murray popped in with a goal in the 35th minute to give Dundalk the lead in the game. Unfortunately, Dundalk sat back, absorbed pressure and tried to protect the lead which proved to be a mistake. A goal was inevitable from Molde as they piled on the pressure and sure enough, in the 69th minute Etasz Hussain equalized. You could feel a 2nd goal coming as Molde grew in confidence and that’s exactly what happened. Dundalk conceded a penalty merely 10 minutes later and unfortunately Omoijuanfo netted. This somehow woke up Dundalk and finally forced them to push for an equalizer, but it was too little too late. Overall, I felt it was poor management and they should’ve pushed on and tried to a second goal.

The hardest opponents in the group and the difference in class was visible right away. Arsenal instantly came out and took the game to Dundalk, passing around them and dribbling through them, as if they weren’t there. Credit to Gartland and Boyle for standing their ground and defending well for pretty much the whole of the first half. But near the end a beautiful ball across for Nketiah and a nice goal from Willock gave Arsenal a two-goal lead and the game was over before the second half even started. Arsenal came out looking for a third goal to kill the game early on and they got that through a beautiful goal scored by Pepe, curled in from just outside the box. They then dominated the ball by having 74% possession. Dundalk were unable to even get a sniff of a goal chance and were reduced to nothing. The only positive out of that game was the fact that Dundalk didn’t commit a single foul despite committing 18 tackles, which isn’t a bad record to have against Arsenal.

Arguably the most entertaining game of the group, Dundalk travelled to Vienna to face Rapid Wien. Dundalk came out to this game hungry and got their reward for it in the 7th minute, thanks to a delicious ball from Shields to Hoban who only had to head the ball in. Wien in the 22nd minute replied with their own screamer, Ljubicic thundered one in top corner from the edge of the box and the game was on again. Wien came out second half and kept the ball well and they got a reward for their perseverance. The ball was crossed in from the right and McCarey palmed it out and it fell to Arase, who only had to tap it into an empty net. Dundalk were forced to find another equalizer and they got it through a penalty in the 81st minute. McMillan stepped up and scored calmly and for the second time, the game was back on. 87th minute and Wien got a free kick and the ball was sent into the box where McCarey for some reason decides to come out way too far off his line and Hofmann gets to the ball before him and the ball sails into an empty net.

At this point Dundalk looked tired, sapped all of their energy and they looked unable to answer for the third time. 3 minutes later, the ball ended up to Demir, who cut in from the left and scored to the bottom corner, a tidy finish beyond McCarey’s reach and the game was well and truly over. In the dying moments of the game, Dundalk got awarded another penalty which McMillan again took care of and scored but it wasn’t. The most entertaining game in terms of goals and just showed Vinny Perth that the team can play football and attack instead of sitting back all game. Only goalkeeping mistakes stopped them from picking up 1 point or maybe even 3 points.

A slow opening 10 minutes until Knasmüller opened up the scoring. Wien sustained a period of pressure before halftimebut Kara made it instead 0-3 for Wien. Perth must’ve given a pretty good team talk and altered the team at half time. Dundalk came out flying and won a penalty just 4 minutes after the half time whistle. Oduwa stepped up and missed the goal opportunity. 10 minutes later, Kara steps up again and bags his second goal of the game, burying any chance of a Dundalk comeback. Luckily enough, in the 63rd minute  Dundalk got awarded another penalty and this time Shields stepped up instead of Oduwa and saved some of their honor.

The final chance to get some points and even throw themselves into the mix for getting out of the group. A win and nothing else. Molde also had the same mentality and outclassed them on the day. The first half was all Molde, Dundalk weren’t able to get a hold of the ball, let alone leave their own half. Molde were hungry for the win and they finally broke Dundalk down. Eikrem scored and completely deflated all the Dundalk players. Just 4 minutes before the end of the half, Molde got another through Omoijuanfo and the game was over.

The second half panned out the same way the first half did, Molde dominated the second half and it was amplified even further by a 3rd goal from Ellingsen. Dundalk were defeated and their campaign was over.  A consolation goal was scored in the 94th minute by Flores but that couldn’t cover up the ending to a very poor campaign.

All in all, I felt that Dundalk was the dark horse of the group and could’ve qualified if they were more adventurous and attacked more instead of sitting back and trying to counter. The 4-3 defeat against showed that if they play with risk, then they can challenge teams.

Sitting back and defending 70-80% of a game while hoping for a dangerous freekick or a lucky header is never going to bring anything. Personally, I had hoped Dundalk would get at least one point. But in a way, I am not surprised. Their road to Europa League was both a struggle and lucky.

They struggled against teams from Moldova and Andorra and went through a penalty shootout as well. Against Klaskvik, a tiny team from the Faroe Islands, they were extremely lucky. At 2-1, Klaskvik were robbed of a penalty and 45 secs later Dundalk scored to 3-1. That’s football and the scoreboard never lie but Dundalk was lucky to be in Europa League.

And money is always welcome in irish football. A simple draw is worth 190,000€  which could have been used towards Filippo Giovagnoli’s Pro license. Instead the club got 50.000€. and thats not good enough. That type of amateurism and the Prügelknabe attitude need to disappear when irish teams play in Europa League but for that to happen, a lot of things need to change in Irish football. A lot…