The Fall of Cork City Football 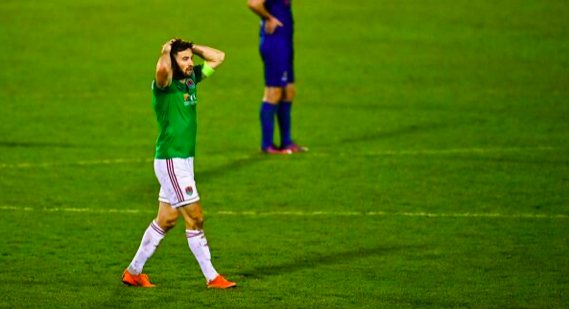 How could one of Irelands biggest football clubs fall from grace so much. We take a look at the club through the eyes of a Cork City supporter.

Going into the 2019 League of Ireland season, if you had told me that my beloved Cork City Football Club would once again be playing its football in the first division just 2 years later, I think that I honestly would have laughed at you. In fairness to me, the idea would have been unimaginable.

After all, Cork City Football were European regulars and were again tipped to be enjoying our fifth season in a row competing with rivals Dundalk at the top of the league. However, the season we were expected to have did not come to fruition, the club finished 8th that year after the team put in some truly uninspiring performances to say the least, this marked the first time where more and more City fans started to openly call for long time manager and Club legend John Caulfield’s head.

‘Johnny C’ was sacked on the 1st of May with the club just one place above the relegation zone. In his place came another former City man, Neale Fenn, who joined the club from first division side Longford Town. With hope that Fenn’s passion and enthusiasm for the club would spur the team on, City would win only two of their 9 remaining league games after he was appointed in late August and would finish the season in 8th.

Off the field, the club’s financial troubles were becoming more apparent to supporters sparking many questions around the previous boards running of the club, did they overspend under the assumption that the club would continue its then four year run at qualifying for the early European rounds and competing at the top of the league? Perhaps the most frustrating part for supporters is that we have never been given any answers to our questions, as those who perhaps should have been held more accountable for their handling of the club’s finances, have since stepped away from the limelight.

The Cork Ship Is Sinking

Heading into 2020, expectations were not quite as high as they were the previous year. With an incredible amount of player departures in the previous year, the most notable of all the departures was fan favourite Karl Sheppard. ‘Shepps’ as he’s referred to around the Cross had been a key part of City’s success and for many losing him was the final nail in the coffin for one of City’s must successful eras. A player like Graham Cummins also decided to leave the club in the relegation scrap which was another indication that something bad was going to happen.

The season started with a 1-0 home loss to newly promoted Shelbourne, the goal coming from the ex-city man Ciarán Kilduff, who was joined in celebration by none other than Karl Sheppard. Right in front of our eyes was the first dagger into the hearts of us Leesiders, who could already sense that we were in for a long and painful season. The loss was followed nights later up in Dublin with a 6-0 hammering at the hands of Shamrock Rovers.

After only one win from the first five games of the season, the League of Ireland would shut down overnight due to the COVID-19 pandemic. It would be over four months before City would take the field again.

With a team now full of youngsters promoted from the academy, Cork City Football now looked like a shadow of its former self. The chaos in the club entered the pitch and it was painful to watch the team loose. Turners Cross which used to be a fort was now empty, thanks to the pandemic and without the ‘The Shed’  and supportors  to cheer them on, the ship kept sinking.

In retrospect, the young players at the club never stood a chance. With seemingly everything in the world against them, Cork’s young lads gave it their all. However, through no fault of their own, the club just could not compete at the premier division, they simply did not have the means to. Nele Fenn was sacked and Cork City were subsequently relegated from the Premier division.

During the offseason, murmurs of a potential sale of the club to Preston North End chairman Trevor Hemmings slowly began. Talks had been leaked long beforehand but there seemed to be some true legs to the story this time around. The price was €1, and Hemmings did try to buy the club in late November, however a disagreement with the Munster FA over the ownership of Turner’s Cross caused the deal to ultimately fall through. The news left many fans heartbroken, as hope of a change in the club’s financial situation seemed within touching distance.

Recently, City did receive the news that they would be allowed to play their home games at Turners Cross for the full 2021 First division campaign, as well as the women’s League of Ireland season. This somehow gives the club and us supporters some hope that they will return back to LOI fast but honestly, I am not sure.

What does the future hold for one of Irelands’ biggest football clubs? Maybe we’ll save that one for another day.